ANNE WITH AN E Is the Intersectional Feminist Show We Need

In January 2016, nearly two years before the New York Times expose on Harvey Weinstein ignited the #MeToo movement that forever changed conversations about gender parity and the entertainment industry, CBC and Netflix announced a buzzy new Anne of Green Gables adaptation from Emmy-winning writer and producer Moira Walley-Beckett, previously known for her work on Breaking Bad and limited series Flesh and Bone.

Released on Netflix on May 2017, audience reactions were mixed. For some viewers, often those with an intense nostalgia for the 1980’s CBC adaptation, ANNE WITH AN E was too “dark” and “gritty”; too Breaking Bad meets Avonlea. Others praised the show as an ambitious rendering of Lucy Maud Montgomery’s world.

ANNE WITH AN E’s second season, which aired in summer 2018, pushed the limits of what many were willing to tolerate from an Anne of Green Gables story. (Black people in Avonlea! A gay soiree!) The third season, which dropped on Netflix in January, was its most ambitious yet, hitting its stride and tying in the end of adolescence stories with a sobering and brutal plot about Ka’kwet, a Mi’kmaq girl, and her imprisonment in a residential school. Viewership that had been steadily increasing exploded seemingly overnight. But a soured relationship between Netflix and CBC caused the networks to terminate their co-production agreement (a partnership which previously brought audiences the radically feminist Alias Grace), and ANNE WITH AN E was canceled prior to its season three release on Netflix.

While reviews of the third season have largely been glowing, there has been very little outcry over the show’s cancelation, particularly in the U.S. When Netflix canceled One Day at a Time, the internet demanded renewal. Netflix eventually bowed to public pressure and released the rights to the series, which began airing a new season on PopTV this spring. It’s easy to understand why One Day at a Time’s cancelation generated mass outrage and celebrity support (and a peremptory statement from Netflix); apart from being fantastic, the show holds cultural significance, particularly in the Latinx community. On its face, ANNE WITH AN E is a story about a young, heteronormative white girl. But dismissing ANNE WITH AN E as such does a disservice to what Walley-Beckett’s show does so well, which is tell joyful stories in and around the intersection of gender, race, sexuality, class, body image, mental health and more.

Looking at ANNE WITH AN E from this point of view it becomes apparent that the intersectional feminist lens is the show’s unifying factor. Walley-Beckett, who wrote the entirety of season one by herself (her self-described “heart project”), brought in a diverse, all-women writer’s room for season two. 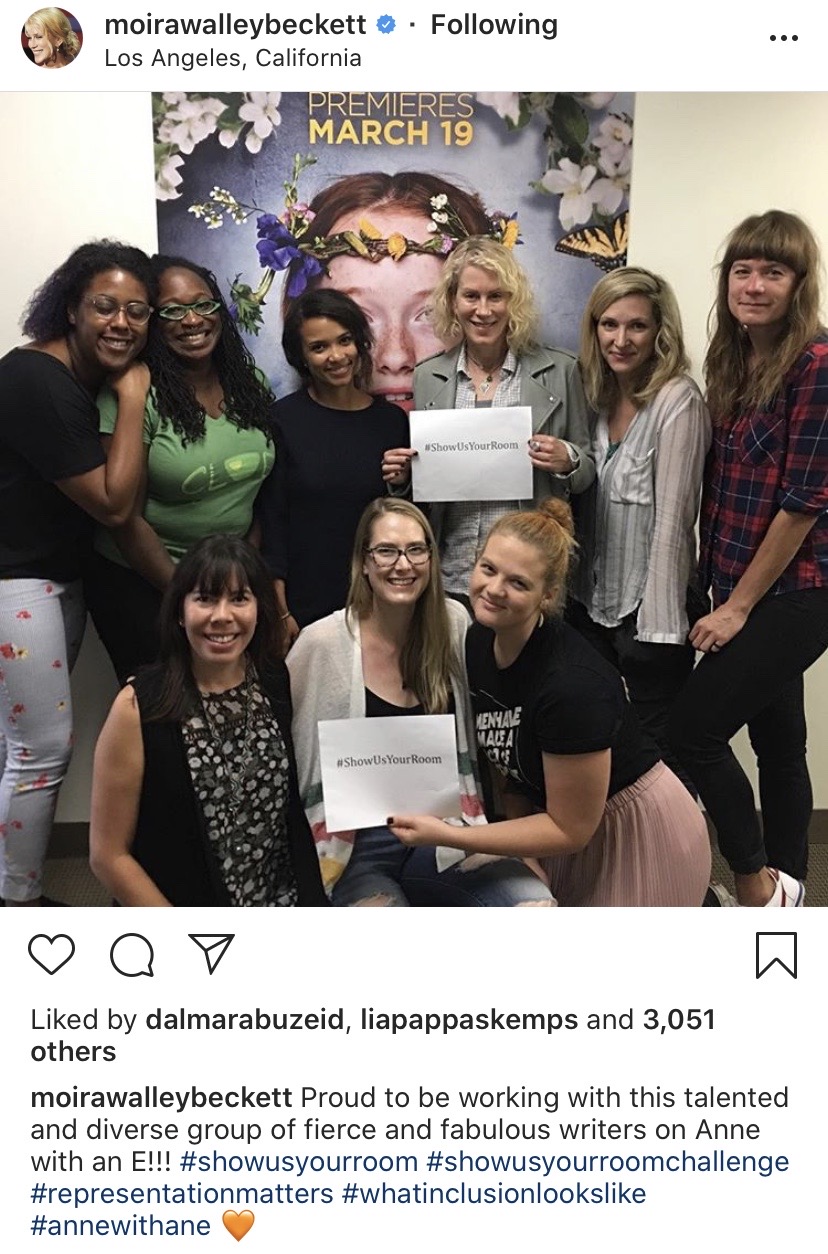 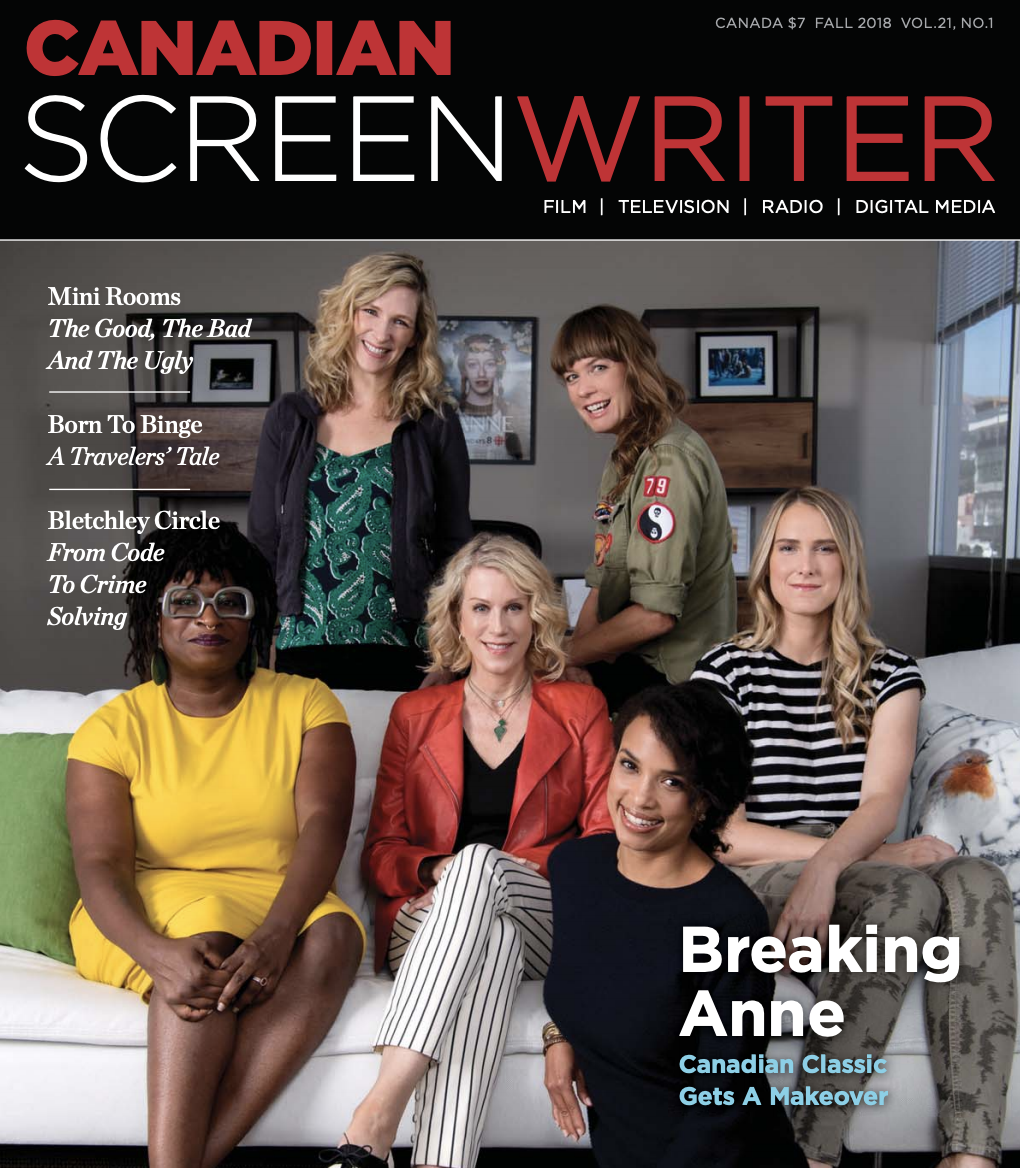 The cast, made up of normal-looking teenagers and veteran actors of all body types, don’t wear makeup. The costumes are lived in; the actors have dirt under their fingernails. The cinematography is aesthetic before #aesthetic became a Pinterest board. The talented teen actors are the actual age of their characters, and notably they aren’t sexualized.

Most of all, ANNE WITH AN E tells stories from all aspects of the female experience. A central plot of a season one episode revolves around Anne’s first period, a topic usually shunned or briefly played for laughs, shame or inconvenience to men. Season two introduces Mary Hanford Lacroix, a black laundress from the Bog, and Muriel Stacy, Avonlea’s new school teacher, and a young widow whose progressive methods and refusal to wear a corset ruffle feathers. Season three tackles gender parity and sexual violence perpetuated on women. Throughout the series, stories about women of all experiences, including women of a certain age, are included. Marilla, Anne’s adoptive mother, Rachel Lynde, the town busybody, and Aunt Josephine (with a queer edit) are not relegated to the sidelines of the story; rather, they are given fully rounded storylines and meaningful development.

With respect to its male characters, ANNE WITH AN E doesn’t bow to complicated male leads or byronic hero tropes. Instead, Walley-Beckett delivers male characters like Matthew, Bash, Gilbert (the first adaptation to give him a personality besides loving Anne), Cole and Jerry who are fully realized, yet remarkably unproblematic. Other male characters such as Mr. Phillips, Mr. Barry, or Billy Andrews are shown struggling under the weight and pressures of toxic masculinity.

ANNE WITH AN E isn’t always subtle, but that doesn’t mean it lacks nuance. It chooses what stories to tell and what stories it isn’t interested in. ANNE WITH AN E isn’t interested in rehashing the familiar teen trope of the overweight bullied friend. Instead, it includes a character who happens to be overweight, who is universally liked (and in fact, has two romantic interests), and whose body is never once commented on. ANNE WITH AN E isn’t interested in giving Anne and Gilbert period-accurate attitudes about race and sexuality, but it is interested in telling the stories of people who have always existed on the margins. Many of the show’s “anachronistic” changes exploit the different experiences of audiences existing one hundred years apart. Much of the show’s exploration of Anne’s residual trauma was already at the surface of Montgomery’s work, and signaled in ways that might not resonate with modern audiences. In other ways, the show subtly moves away from era-typical prejudices. In the book, a Jewish peddler sells Anne defective hair dye which infamously turns her hair green. In ANNE WITH AN E, the hair dye works, but Anne, missing her red hair, attempts to scrub the dye out with blueing soap, which turns her hair green. ANNE WITH AN E is one of the only period dramas sticking its neck out and attempting to tell these stories, which is a testament to the fact that the show’s producers didn’t see a point of adapting the story without widening its world.

In the networks’ only statement on the show’s cancelation, Netflix and CBC stated that they hoped the third season would bring a “satisfying conclusion to Anne’s journey.” Despite the fact that the finale queues a reset into young adulthood and leaves many plot lines unresolved (it’s hard to imagine that Walley-Beckett would have left Ka’kwet’s story where it was had she known the season’s finale would be the last episode), it’s easy to see why Netflix might think that’s enough, bringing full circle a failure of the networks with this ambitious show from day one. Deeming a season finale a “satisfying conclusion” because Anne found romantic love and calling it a day feeds into pre-#MeToo notions of what audiences might have expected from a girl’s coming of age story, and discounts the value in stories about young women as they enter adulthood, and of all the other stories that ANNE WITH AN E tells so well.

ANNE WITH AN E’s cancelation by Netflix is one of many in a disturbing trend of the streamer disproportionately canceling shows created by women and those with diverse casts. With Netflix, and the industry as a whole, women-led shows and shows with female leads are given fewer seasons to succeed, and women creatives are given less room to experiment or fail. Netflix loves to talk about its commitment to diversity and inclusion in its offerings, but the reality is that Netflix’s commitment to telling diverse and intersectional stories extends only so far as it suits Netflix’s bottom line.

ANNE WITH AN E doesn’t have a complicated male lead, a dystopian backdrop, or splashy special effects, yet it has clearly resonated with audiences around the world and become a sleeper success. In the era of “good” television, it’s easy for quiet, well-wrought content to fail to penetrate the cultural Zeitgeist (Netflix’s favorite term). And, because the outcry that has been simmering for several months now has failed to boil over into a larger conversation about why ANNE WITH AN E is important and deserves to continue, Netflix will continue to ignore it.

ANNE WITH AN E’s Renewal Petition Continues to Break Records

Comfort Viewing in the Age of the Coronavirus